It starts all here

System security at the speed of the cloud

Note: MIG is under heavy development. The code is stable and used in production, but changes may be backward incompatible. Be warned.

MIG is OpSec’s platform for investigative surgery of remote endpoints.

MIG is composed of agents installed on all systems of an infrastructure. The agents can be queried in real-time using a messenging protocol implemented in the MIG Scheduler. MIG has an API, a database, RabbitMQ relays and a console client. It allows investigators to send actions to pools of agents, and check for indicator of compromision, verify the state of a configuration, block an account, create a firewall rule, update a blacklist and so on.

For example: an investigator launches an action to search for an apache module that matches a given md5 value. MIG will register the action, find all the relevant targets and send commands to each target agent with the detail of the action. Each agent then individually runs the action using built-in modules, and sends the results back to the MIG platform.

Agents are designed to be lightweight, secure, and easy to deploy. All parameters are built into the agent at compile time, include the list of investigator’s public keys. The agent binary is statically compiled for a target platform and can be shipped without any external dependency. Deploying an agent is as easy as wget -O /sbin/mig-agent https://fileserver/mig-agent && /sbin/mig-agent

MIG is designed to be fast, and asynchronous. It uses AMQP to distribute actions to endpoints, and relies on Go channels to prevent components from blocking. Running actions and commands are stored on disk cache, and don’t rely on running processes for reliability.

Speed is a strong requirement. Most actions will only take a few hundreds milliseconds to run. Larger ones, for example when looking for a hash in a large directory, should run in less than a minute or two.

Privacy and security are paramount. Agents never send raw data back to the platform, but only reply to questions instead. All actions are signed by GPG keys that are not stored in the platform, thus preventing a compromision from taking over the entire infrastructure.

Check out this 10 minutes video for a more general presentation and a demo of the console interface. 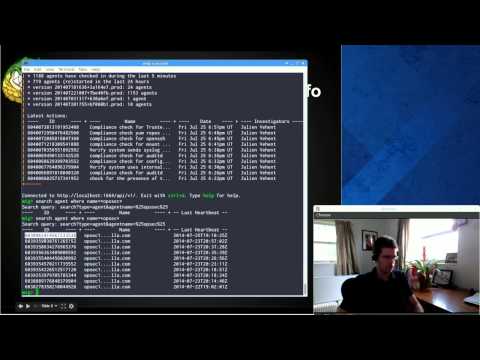 All documentation is available in the ‘doc’ directory.

We use Bugzilla to track the work on MIG.

Some modules for MIG: https://github.com/jvehent/go-toybox

More Information can be found on: https://github.com/mozilla/mig